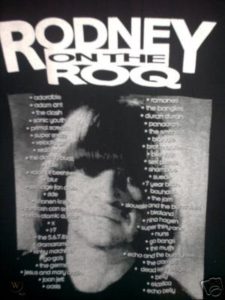 Rodney Bingenheimer is an American radio disc jockey who was on the Los Angeles rock station KROQ-FM. He is notable for helping numerous bands become successful in the American market. His contribution to the music business has been described as important.[1] He developed a reputation for being the first American D.J. to identify new artists and play “edgy new bands” such as Blondie, the Ramones, the Sex Pistols, Van Halen, Guns N’ Roses, Duran Duran, The Cure, Joan Jett, The Hollywood Squares, Hole, Symbol Six, No Doubt, Blur, Nirvana, Sonic Youth, The Bangles, X, The Pandoras, Germs, and many others.

Rodney on the ROQ Vol. 2

"I Got Van Halen The Gig @ The Starwood, & Broke Them on KROQ" - Rodney Bingenheimer